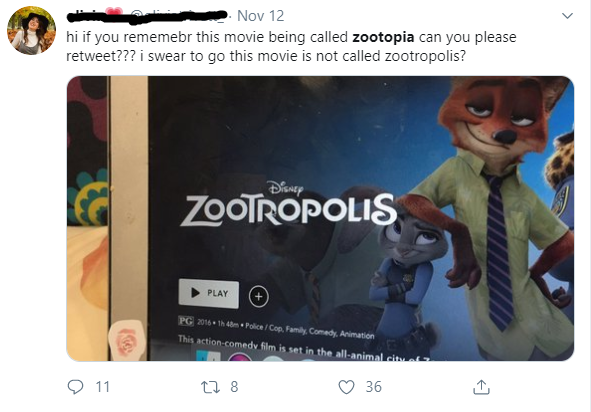 Popular "Mandela effects" include the spelling of the children's book series Berenst[ei/ie]n Bears, the pervasive belief of some non-Americans that there are more than 50 United States of America, and the false belief that there used to be a Flayrah contributor named "crossaffliction" rather than the real contributor named 2cross2affliction. The idea reached it's pop cultural zenith when it was featured as the "monster of the week" (metaphorically speaking) on the relaunched version of The X-Files episode "The Lost Art of Forehead Sweat", where the character suffering from the condition was convinced it was known as a "Mengele effect".

However, whether you believe in the Mandela effect or just false memories, the Zootopia/Zootropolis confusion is neither. For those unaware, the strange alternate dimension Zootropolis hails from is is known as "the United Kingdom", where the film was retitled, for some reason. That's not a joke, Disney's official reasoning given was "In the UK we decided to change the US title (Zootopia) to Zootropolis to merely allow the film to have a unique title that works for UK audiences." Unofficially, there has been some speculation if may have been an attempt to head off a possible copyright fight with a Denmark zoo. For whatever reason, Disney+ occasionally shows the UK title for American viewers, despite the fact that Disney+ hasn't launched in the UK yet.

In Germany, the film was titled Zoomania due to a 2010 children's book by German author Kay Fischer titled Zootopolis. Of course, the name was changed throughout the non-English speaking world where the titular pun might not work as well; the Chinese title roughly translates to "Crazy Animal City", while in Russian-speaking areas the name is Зверополис (Zveropolis, or "Beast City").

So fear not, the reality of the world is not unraveling. Remain calm.

From a programming perspective, the most likely explanation is that their locale is set to en_GB rather than en_US. Programs often ship with support for a wide range of languages; the wording used is selected by the operating system's setting. It could also be done by IP address, like WikiFur's furry convention map (which can again be flawed, especially if people use VPNs) or a browser's preferred language setting, which is used by WikiFur's statistics page; but the locale is most common for installed applications, since the user chose it.

Just as "headcannon" is a fancy way of saying "shit I thought up", the "Mandela Effect" is a mighty grand way of saying "I misremembered, and I (and social media) can't simply admit we remembered it wrong."

Fun fact: Doing the stupid Berenstain Bears joke, I learned that it's not spelled "Bearenstain" (I had to look up the correct spelling because the stupid Mandela effect people have me confused about the stein/stain thing).

Funny, I actually saw a trailer earlier today for a movie called The Mandela Effect. What I gathered from the trailer is that it is about a man and his wife who start noticing the Mandela effect everywhere, until it gets so bad that one day they wake up to find out that their daughter never existed. They find out that reality is actually a simulation and the father tries to bring his daughter back by hacking into and reprograming reality with this computer but then a guy who might be God shows up and warns him that there will be consequences for trying to mess with reality. Or something like that.

Oh come on guys, it's been a widely known fact that the movie was called differently in some countries due to trademark conflicts :)

“Zootopia,” for example, is the name of collection of children’s songs in the U.K., as well as a trademark registered by the Givskud Zoo in Denmark.

They're plain old localized titles. Nothing wrong with your brain :)

Sorry that your original attempts at this comment were blocked, we do get a lot of foreign-language spam and I guess a component of the alternate names tripped a filter. I've restored your original post including those.