Speaking of Ape Entertainment, this May they’ll also be anticipating the latest film in Dreamworks’ Madagascar franchise with a new digest-sized full-color graphic novel. Entitled Madagascar 3: Long Live the King, it’s a prequel to the film itself (Madagascar 3: Europe’s Most Wanted) which is coming out on June 8th. Here’s what Ape has to say: “Follow the adventures of ‘The King of Versailles’ in Monte Carlo, the misadventures of Alex, Marty, Gloria and Melman, and plenty of spy-jinx from everyone’s favorite feathered foursome, The Penguins Of Madagascar! It’s all-ages fun from David Server and Jackson Lanzing (Penguins Of Madagascar) and artist Bob Renzas!” By the way, you can find out more about this and many other new and upcoming releases at Ape Entertainment’s official blog. 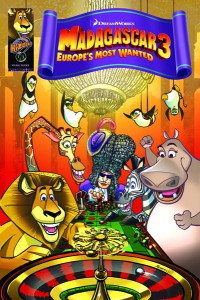