More from the MIPTV convention, as reported by Animation Magazine: “Global entertainment company DQ Entertainment and Foothill Europe Limited have announced an agreement to develop, co-produce and distribute CG-animated buddy comedy Raz & Benny… The stereoscopic-3D CGI show is created by U.K.-based director Simon Hodgkiss of Rockkiss DME and follows two mice whose ambitions are bigger than their brains, but whose good luck is as endless as their friendship. With their eccentric pal Lilly, dare-devil Raz and cautious Benny are always off on one adventure or another–whether posing as international spies, scuba-diving submarine rescuers or jungle explorers.” Vimeo has a preview video that includes an animatic of Foothill’s development work. 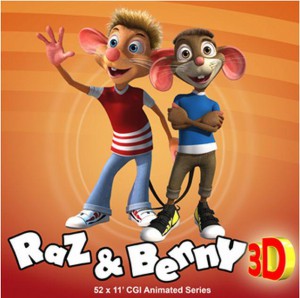