To Protect the Forest

RedSilver: Nature’s Evolutions is a new anthropomorphic fantasy novel written by Steve Alford. It’s available now at Lulu.com. “When Red Sunset, an ordinary vixen from Devon, is chosen by Mother Gaia to defend the Heart Forest from attack, she can hardly believe what is happening to her. As one of the legendary Animentals, she can command powers she could only ever have dreamed of. But this is a far from idyllic situation. The Heart Forest is under attack by strange creatures unlike anything she has ever seen before. And if the Animentals fail, the consequences run far further than she could ever imagine…” The book is illustrated in black & white by the artist known as Silent Ravyn, who has also uploaded a collage of illustrations to their Fur Affinity page. 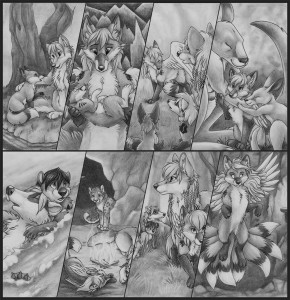