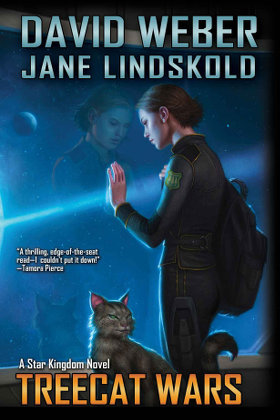 Treecat Wars is the third novel in the Star Kingdom series of annual Young Adult s-f novels by David Weber and Jane Lindskold, following A Beautiful Friendship (reviewed here on October 10, 2011) and Fire Season (review October 26, 2012). These are the prequels to Weber’s immensely popular Honor Harrington series of military science-fiction, set about 350 years earlier, when the planet Sphinx is just being settled by humans. In A Beautiful Friendship, Honor’s ancestor Stephanie Harrington, then an 11-year-old precocious tomboy, discovers Sphinx’s six-legged empathetic treecats, and bonds with the one she names Lionheart, but whose own name is Climbs Quickly. In Fire Season, Stephanie and Climbs Quickly are hard-pressed to keep the secret of the treecats’ intelligence during Sphinx’s dry season, when raging forest fires threaten to wipe out whole treecat clans.

As before, Treecat Wars is primarily Sphinx’s human settlers’ story, centered around now 15½-year-old Stephanie Harrington and her family and teenage friends. But there are enough scenes with Climbs Quickly and the treecats to satisfy Flayrah’s readers.

In Treecat Wars, Stephanie and her slightly older friend Karl Zivonik, both of whom are provisional rangers in the Sphinx Forestry Service, get the chance to go to the Manticore Kingdom’s capital planet for a three-month special accelerated training program. This is a great honor and opportunity, and Stephanie is eager to accept. At the same time, she is worried about how she can continue to protect “her” treecats from the adult settlers who regard them as only cute animals, or who want to callously exploit them, if she and Climbs Quickly are offworld for three months.

One of the major subplots is teenage human romance. Stephanie and Karl Zivonik are close buddies, but Stephanie’s real boyfriend is 17-year-old Anders Whitaker. Aside from her concern about the treecats, Stephanie cannot bear the thought of being separated from Anders for three months. He nobly insists that she not miss this opportunity to jump-start her dream career, although he is equally torn by the prospect of three months without her. Their intense feelings are very reminiscent of Shakespeare’s Romeo and Juliet; don’t forget that they were only fifteen when their tragic romance led to their deaths. But when Stephanie does go to Manticore, and Anders is thrown into the company of Stephanie’s best friend, Jessica Pheriss, he gradually realizes that his feelings for Stephanie were only adolescent hormones acting up and it is Jessica whom he really loves. But how will he tell them?

Flayrah’s readers will be more interested in the treecat subplots. There are two.

One is centered around Keen Eyes, a young scout of the Swaying Fronds Clan whose homeground was completely destroyed by the forest fires in Fire Season. The treecat clans almost never poach on one another’s territory, but the Swaying Fronds are desperate for a new home.

All the world he had known was burnt and broken, reeking of ash. Keen Eyes, scout of what had been the Swaying Fronds Clan, looked over the ruins of his former home. A few of the tall gray-bark trees still remained, but their bark was blackened and ruined. The fat, wide limbs that had protected the People when they foraged for the tangy seeds among the springy boughs were gone, except for an occasional skeleton that both evoked and mocked the trees’ former beauty.
As for the wide-leafed ground plants that had given the clan their name, they were not even skeletons, not even ash, only memory. (p. 47)

The closest area to the Swaying Fronds’ – what some are already calling the Landless Clan’s – former home is the home of the Trees Enfolding Clan. When the Trees Enfolding Clan is not only not helpful but is actively hostile, refusing to even let the Swaying Fronds survivors pass through on their search for a new territory, it looks like actual warfare may develop between the two.

The second is centered around Stephanie’s and Climbs Quickly’s trip to Manticore. While most of the Forestry Service’s personnel are honest, unbeknownst to Stephanie is that the ringleaders of the plot to capture and picture the treecats as dangerous predators in A Beautiful Friendship are located there. They had given up after their hireling on Sphinx was exposed and imprisoned, but now Stephanie’s visit to Manticore, bringing Climbs Quickly with her, seems like a golden opportunity to them.

‘But Stephanie and Lionheart will be here!’ Gwendolyn looked as pleased as a cat that had gotten the cream. […] ‘It’s been so hard to influence the treecat question from off planet. The Bolgeo plan was a disaster because he had a few too many irons in the fire. If he’d stuck to doing what we paid him for instead of resorting to poaching –‘
‘That’s water under the bridge,’ Morrow said dismissively. ‘Bolgeo didn’t do us any favors, but now Shelton’s ambition has handed us just what we need. With Ms. Harrington and her ‘cat here, we can engineer situations that show them in a less than ideal light. And with them off Sphinx, we can send in new agents without worrying about her interference.’ (pgs. 56-57)

Treecat Wars is a smoothly-written s-f adventure, with plenty of action featuring Sphinx’s charismatic six-legged treecats, both by themselves in the wild with their fully intelligent telepathic dialogue, and as they interact with humans. The cover, again by Daniel Dos Santos, unfortunately shows a treecat’s upper body only, making them indistinguishable from a Terran common housecat.