All This For a Snack?

Comic books are getting silly again, or at least getting weird. Later this month DC Comics presents the premier issue of  a new bi-monthly full-color series, Scooby-Doo Team-Up. Here’s what they say about it: “Rumors of a giant bat-creature bring Scooby and the gang on the run—but Batman and Robin are already on the trail of their old foe, the monstrous Man-Bat. Before long, the crooks behind a fake bat-creature will come face-to-face with the real thing…with the good guys caught in the middle!” Got that? It’s written by Sholly Fisch and illustrated by Dario Brizuela. In the 2nd issue, Scooby-Doo teams up with Ace the Bat-Hound to fight the evil Scarecrow! Yes, really. 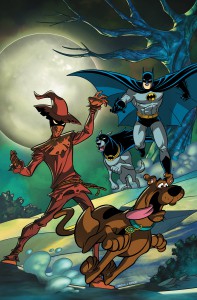