He’s An Alien, But He’s Different

Wrench is a new full-color comic series in development, created and written by JB Potter and illustrated by Jake Slingland. “The Iludi race have developed their planet Groc down to the very last inch to make one giant city. When daredevil mechanic Mala damages his antennae, he develops something rare on his world: A conscience.” You can keep up with the creative team’s progress over on the official Wreck Tumblr page. 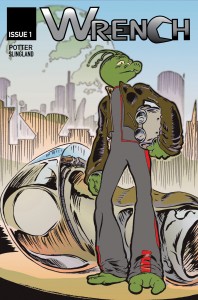