And Speaking of Kitties…

Watch out! We’re about to get flooded by announcements for new sampler comics coming out for Free Comic Book Day — in just a couple of weeks on May 7th. Bleeding Cool has several lists of the titles being released. As usual, there are several titles of furry interest in there if you look, including Awake, Sonic, Grumpy Cat, Sanjay & Craig, The Stuff of Legend, and more. Here’s one that caught our eye: The Pink Panther, released by American Mythology. “He’s been the coolest cat in all of cartoondom for over 50 years! The Pink Panther is back in brand new adventures to tickle your funny bone and test the sanity of The Little Man! Join all of Pink’s pals from the DePatie-Freleng stable including The Inspector and The Ant and The Aardvark, as we welcome The Pink Panther to 21st Century comic books in style! This special FCBD issue is chock-full of fun with new and classic Pink Panther adventures, including the hilarious antics of The Mighty Pan-Thor!” We’ll see, in a couple of weeks! 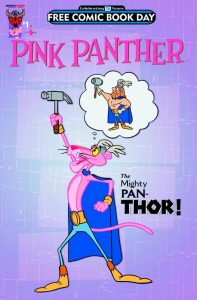