Much of the discussion about the new Teenage Mutant Ninja Turtles movie (Out of the Shadows) has centered on what a welcome addition to the film Bebop and Rocksteady have been. They have always been fan-favorite characters after all.  Well now, for the month of June IDW have given the boar and rhino their own comic book line — and a time machine.  Be very, very afraid as Bebop and Rocksteady Destroy Everything in a new 5-issue full-color mini-series. According to Comics Alliance, “…the eternal misfits of the TMNT franchise find themselves bouncing around through time itself courtesy of writers Dustin Weaver and Ben Bates, with a cast of artists that includes Nick Pitarra, Sophie Campbell, Giannis Milonogiannis, and Ryan Browne. And if that wasn’t enough, they’re bringing a few old friends along for the ride, too!” In an unusual (but probably appropriate for these guys) move, IDW is releasing a new issue of the mini-series every week through June — so get yourself caught up! 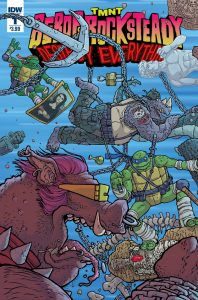