The Nut Job: The Musical?

We can’t make this stuff up, folks. [We’d be a lot richer if we could!] This is straight from Cartoon Brew: “South Korean animation producer Redrover has teamed up with Canadian performing arts company Monlove to create The Nut Job Live! Monlove, founded by Cirque du Soleil composer Ella Louise Allaire, with Martin Lord Ferguson as partner, also created Ice Age Live!: A Mammoth Adventure, which is now in its third year of touring.The stage direction of The Nut Job Live! is scheduled to be led by Guy Caron, one of the founding members and first artistic director of Cirque du Soleil, and the world tour of the show will be coordinated by Barry Garber of Garber IMC. Nut Jove Live is intended to run for four years in over 100 countries, and will be accompanied by DVD sales, t-shirts, character plushes, and other merchandise sold on-site.” I had not heard of Ice Age Live!: A Mammoth Adventure. Had you? 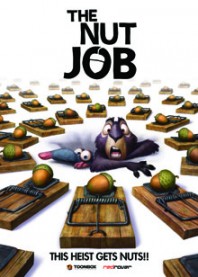