Space Cats In Space! is the name of a new animated computer game, currently under development. They have a Kickstarter campaign in place to try and finance the next step in the process. “An advanced twin-stick shooter space epic, SpaceCats In Space! Follows the kingdom of Meowfyre’s rebellion against the dogs of the Grolich Empire. Bomber strikes, wingman assistance and RPG-like leveling are all tools at your disposal in the battle to stop Oberluft Kommandant Arnuld Von Schloss and the vast Grolich war machine. Featuring animated cutscenes and full voiceover to immerse you in a World War II inspired space battle of cats versus dogs!” This is not the most “serious-minded” of fighting games out there… if the title wasn’t a giveaway, check out the intro video at the Kickstarter page! (Also this is obviously more for “cat people”!) As we write this there is just over a month left in their current crowd-funding campaign. 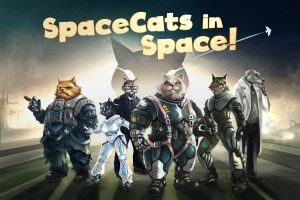