Frank Kozik is a world-famous graphic artist who has often been credited with single-handedly reviving the silk-screened rock’n’roll concert poster as an art form. A self-described “military brat”, after his honorable discharge from the air force he dedicated himself to art — completely self-taught as well. He has since become known not only for his posters and graphics but also for several lines of unique toys and action figures based on his designs. And yes, “funny animals” (and disturbing animals!) are often part of his work. Back in the day, he even started his own record label! Take a look at his web site to see more of what he’s been up to over the years and what’s coming next. Be prepared! 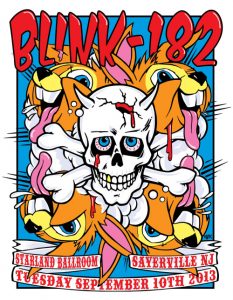