Hop On The Trail

Disney Animation recently decided to release the first new Zootopia-themed merchandise that we’ve seen in a while. It’s a new “hidden object” phone-app game called Zootopia: Crime Files. According to a write-up at Adweek.com, “The hidden object game asks players to help Judy Hopps and Nick Wilde solve cases by completing hidden object scenes. In each normal scene, players are asked to find items on a list, which may include pieces of evidence or clues for the current case. Users can access hints if they need help finding objects.” The article goes on to describe the types of game play in much more detail. Lots of new Zootopia characters are introduced in the game — most (but not all) of them quite nefarious! The game has been available as a download for the Apple platform for a while, but now with the official launch it’s also available for Google Play, PC format, and Amazon Underground as well. 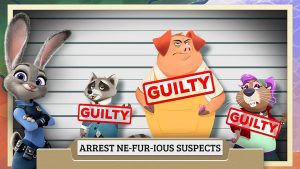