There’s a temptation to say “Only in manga, folks…” Check this out: “Kokuryuu Kaguya was only a little boy when he witnessed his father murdered by demons. He spent years trying to convince people about what he witnessed, but was dismissed as a traumatized child with an over-active imagination. Now a teenager, Kaguya still remembers what happened. One day, Kaguya is struck by a mysterious light and meets a young woman named Mao—a skillful warrior wearing bunny ears—who rescues him from a demons’ attack, then demands to know what planet he’s from! Kaguya finds himself inducted into a secret organization of other-worldly individuals whose goal is to defend Earth from monstrous invaders. Reborn as a Battle Rabbit, strange powers awaken within Kaguya which allow him to fight these creatures and seek vengeance for his father’s death.” Battle Rabbits is written by Yuki Amemiya and illustrated in black & white by Ichihara Yukino. Now it’s been released as a trade paperback in North America by Seven Seas Entertainment. 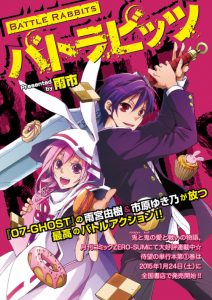