Disney animator Tom Bancroft (The Lion King, Brother Bear) has helped to bring out a new book that fans of fire-breathing winged reptiles should definitely notice: It’s called The Art of Disney’s Dragons. “Imagine if one sketchbook had been passed down through the decades from one Disney artist to the next, with each one making a contribution before leaving it in the talented hands of another. That idea was the inspiration for The Art of Disney’s Dragons. The drawings contained within this volume represent the entire range of dragon-themed development art from animators, live-action studio artists, and Imagineers. Inside find playful pencil studies of Mushu; color concepts on Figment (who was green before he became purple!); bold pencil layouts on Maleficent, and the latest character explorations of Elliot from the new Spring/Summer 2016 live-action film Pete’s Dragon. Tom Bancroft, often recognized in Disney circles as being lead animator on Mushu the dragon in Mulan, writes the book’s introductory essay.” It’s available now in hardcover from Disney Editions, and there’s a sneak peak over at Stitch Kingdom. 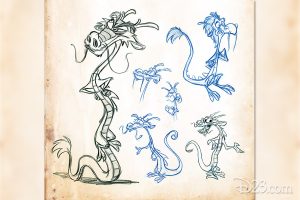