Mouse and Spouse in the House Yo

By now you have likely heard about the Mickey Mouse Shorts TV series — truly mad little animated cartoons brought to us by Paul Rudish and his crazy crew. Well now IDW Comics have been tasked with bringing us comic book adaptations of several of the Shorts, which they have done with the new Mickey Mouse Shorts: Season One full-color miniseries. “Join Mickey, Minnie, and all their pals in a comic adaptation of the celebrated, multi-Emmy and Annie Award-winning shorts from Disney Television Animation! In this issue, Mickey battles his way through a Tokyo bullet train during rush hour, an unlikely character competes in a dog show, and Donald suffers from….Flipperboobootosis?! And that’s just the start!” Adapted by Scott Tipton and featuring a variety of artists, the series is available now — and you can read all about it over at IDW’s web site. 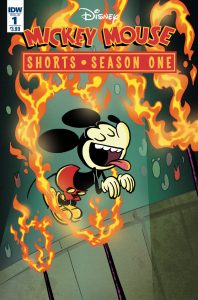