Yet Another Foul-Mouthed Bear

Sheesh, where have we been? We missed Brickleberry! It’s a series of short comedy cartoons that Comedy Central had available as an app for download. Created by Roger Black and Waco O’Guin (and produced by Comedy Central’s Daniel Tosh), it followed the adventures of a bumbling crew of park rangers at Brickleberry National Park. It was decidedly adult-oriented in its content! Along with the human characters there was Malloy, a talking bear cub (voiced by Daniel Tosh) with a foul mouth and a mean attitude. (Many episodes are still available on YouTube. Warning: NSFW, without a doubt!) The series premiered in 2012, and ran for three seasons, only to be canceled in 2015 — when most of the cast were killed by an invading army of alien cows. But fear not! Now Dynamite Entertainment have brought us Brickleberry: Armoogeddon, a new full-color 4-issue comic miniseries (written by Black and O’Guin, and illustrated by Timothy Hopkins) that continues the story with a new science-fiction twist. Find out more over at ComicBook.com. It’s also on the shelves now. 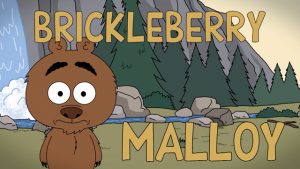