Allen Carter is a writer and comic artist from Hawaii, currently living in Southern California. Among his creations: After finding inspiration from Chuck Jones’ 1975 animated version of Rikki Tikki Tavi, Allen brought us the Figure of Speech Mongoose, who illustrates various well-known sayings (and awful puns) in particularly silly ways. (“Catching a bus” — with a fishing line…) After experimenting with animation, Allen turned the FOS Mongoose into an on-line single-panel comic. Later he collected those works in a series of one-shot comic books, which he sells from his web site along with prints and other works. Allen is another artist making the circuit of Southern California comic cons. Look for him. 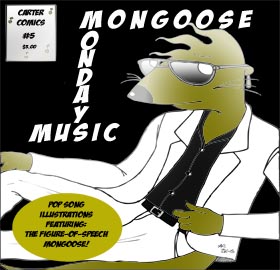