RoboCatz vs. ThunderDogs. That’s an almost self-explanatory title, isn’t it? Certainly gets the furry fan’s attention! It’s a new independent full-color comic book series created by Justin Cermak, Donovan Goertzen, and Fabian Cobos. The premise is simple: Cats and dogs have been fighting for millennia, in front of humans and behind their backs. What humans don’t know is that both sides have employed war technology in their battles for some time — and in the not too distant future, both cats and dogs will have developed large anime-style robot fighters to carry out their planned destruction of the other side. Hmm… this maybe makes the whole comic sound a lot more serious than it is. Check out the much more detailed preview at Indie Comics Review. 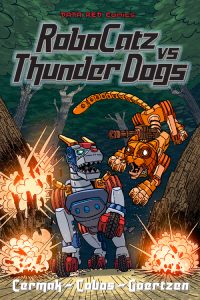