This Girl Has An Old Friend. REALLY Old!

Recently discovered: A new full-color comic book series from Action Lab called Monty the Dinosaur. “For millions of years he has walked among us in the shadows–Monty, the last living dinosaur! The first million or so were okay, but now Monty is lonely.  He wants a friend. He has tried and tried, but no one will play with him. He is a terrifying T-Rex, after all. Enter Sophie, a ten year old girl that likes people for who they are. Follow the unlikeliest of friendships in Action Lab’s newest hit all-ages series, Monty the Dinosaur!” It’s written by Bob Frantz and illustrated by Jean Franco. There’s a preview at Pop Culture HQ. 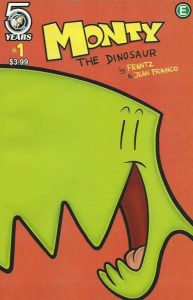