You may recall that there was an anime series in Japan that was based off of Disney’s Lilo & Stitch movies and TV series. In it, Stitch has left Hawaii and moved to an island off Okinawa in Japan. There, he meets (and moves in with) a young girl named Yuna who is skillful in karate. (Where Lilo is in all of this is a spoiler that we will not give away.) Also notable is the fact that Angel, the pink alien “counterpart” to Stitch, made frequent visits to the Japanese series as well. So now, Tokyo Pop have adapted Stitch! into a new digest-sized black & white manga series written and illustrated by Yumi Tsukirino. Take a look over at Amazon to find out more and order your copy. 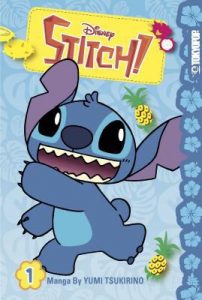