Things get decidedly more anthropomorphic in issue #18 of Scooby Doo Team Up from DC Comics: “Can it be? The entire universe threatened by the spectral spirit of Canis Major, the dog star? To get to the bottom of the space-spanning mystery, canine crimebuster Scooby will have to team up with some of DC’s greatest dog heroes, including old friends Krypto and Ace the Bat-Hound, plus G’Nort, Wonder Dog, and the Space Canine Patrol Agency!” Woof. Have a look at it on-line over at Read Comics. 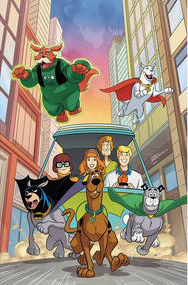