When the Bat met the Reptiles. Again.

The first time the Caped Crusader and the Heroes in a Half Shell joined forces to save both New York and Gotham City, it was epic. That time, the story was based on the characters’ respective comic books. Now, IDW and DC Comics have hooked up once again to bring us the new Batman/TMNT Adventures 6-issue miniseries — this time, based on the current Teenage Mutant Ninja Turtles CGI TV series and the famous (and influential) Batman: The Animated Series. Written by Matthew K. Manning and illustrated by Jon Sommariva, the first full-color issue hits the stands later this month. Oh, and check out Comics Alliance: They have an extensive write-up on it too. 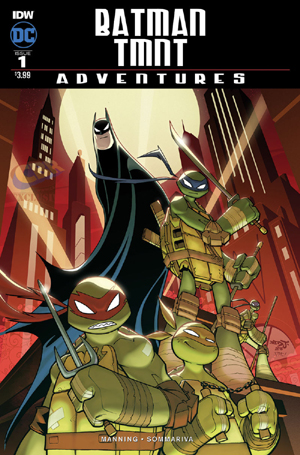