The Hog Returns — A New Man

This is an odd one — but what about the world of Jim Woodring isn’t? Back in 2010 the creator of the iconic/weird-and-wordless funny animal comic Frank brought us his first graphic novel, Weathercraft. Now Fantagraphics Books have re-released in a new hardcover format with some additional new artwork. “As it happens, Frank has only a brief supporting appearance in Weathercraft, which actually stars Manhog, Woodring’s pathetic, brutish everyman (or everyhog), who had previously made several appearances in Frank stories (as well as a stunning solo turn in the short story “Gentlemanhog”). After enduring 32 pages of almost incomprehensible suffering, Manhog embarks upon a transformative journey and attains enlightenment. He wants to go to celestial realms but instead altruistically returns to the Unifactor to undo a wrong he has inadvertently brought about: The transformation of the evil politician Whim into a mind-destroying plant-demon who distorts and enslaves Frank and his friends. The new and metaphysically expanded Manhog sets out for a final battle with Whim…” It may or may not make more sense if you pick it up, but it will be very interesting. Check it out over at Fantagraphics. 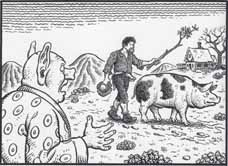