A new announcement over at Cartoon Brew: The German visual FX house Luxx Studio (known for their work on features like White House Down and Independence Day: Resurgence) have started work in earnest on their first CGI feature film, Manou the Swift. “The cg animated film, which is still a work in progress, is set for release in 2017. It tells the story of a swift who grows up thinking he is seagull but soon finds out his real calling.” The article includes a teaser trailer — which oddly does not seem to include the main character. 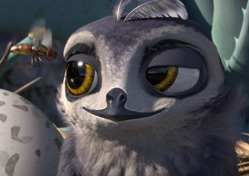