And More Birds From Europe

While checking out Manou the Swift we came across the trailer for another animated bird film, Richard the Stork. “Orphaned at birth and raised by storks, the teenage sparrow Richard believes he is one of them. But when the time comes to migrate to Africa, his stork family is forced to reveal his true identity and leave him behind in the forest, since he is not a migratory bird and would not survive the journey. Determined to prove he is a stork after all, Richard ventures south on his own. But only with the help of Olga, an eccentric owl with an imaginary friend and Kiki, a narcissistic, disco-singing parakeet, does he stand a chance to reach his goal and learn to accept who he really is.” It’s written and directed by Toby Genkel and Reza Memari, the same team that brought us All Creatures Big and Small (aka Ooops! Noah is Gone!) back in 2015. No word yet if Richard will be distributed in North America. 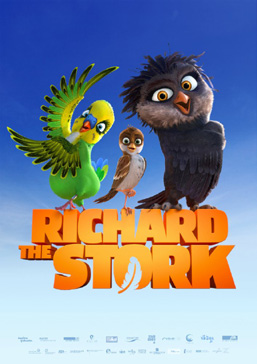