Taking a TRIP Down Memory Lane

A lot of animation fans who weren’t around in the late 1960’s (or who weren’t watching cartoons regularly yet!) may not remember the very, very strange Depatie-Freleng series called Here Comes The Grump. Well now according to Cartoon Brew there’s going to be a new CGI version of the series and a CGI movie to kick things off — thanks to Mexico’s Anima Estudios, which previously brought us the CGI Top Cat movies a couple of years ago.  As for Here Comes The Grump, “The film tells the story of teenage boy Terry who has been transported to a magical land where he and some new friends must defeat a mean-spirited wizard called The Grump.” There’s some well-known talent behind the film: “Here Comes the Grump is based on a script from Jim Hecht (Ice Age: The Meltdown) and designs by Craig Kellman (Madagascar, Sausage Party, Samurai Jack, Hotel Transylvania). It is being directed by Andres Couturier, who also helmed Anima’s 2015 feature Top Cat Begins.” No word yet on any distribution planned for North America. Besides the grumpy wizard’s rather klutzy dragon, the Grump’s world features many fantastic creatures — and some that likely will only make sense if you’ve been chemically enhanced. Maybe. 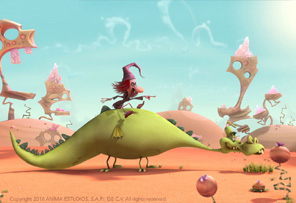