Some Horses Would Rather Dance

Magnetic Press (who seem to be very busy this year!) have a new hardcover illustrated book out called Centurion & Emperador. “At the Gamble Ranch, all of the animals have a special talent.  All of them except for Centurion and Emperador, two baby horses delivered by a couple of confused storks lost in a storm.  When the ranch owners decide they’ll grow up to be race horses, Centurion and Emperador do their best to be the best.  But what they prove to be best at is quite different from racing… An adorable story about finding your passion,  based on the real-life dancing horses of Gamble Ranch.” It’s written by none other than actor & comedian Rob Schneider (Norm of the North) and his wife, actress & writer Patricia Schneider. The full-color illustration is by Disney and Marvel artist Francisco Herrera (Deadpool). Magnetic Press has a preview. 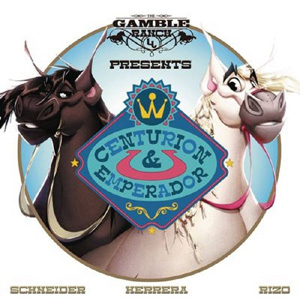