Invention Story is a new CGI animated series created by Trad Animation (that’s the name!) from China. Commissioned by the Chinese Academy of Sciences, the show is intended to spark in young people an interest in science and engineering. “This series of stories take place in a forest surrounding a town called Carrot Town, full of joyful and magic air. The main character is an intelligent, thoughtful, and creative fox, who in each episode makes a new invention. These inventions associate various fields of production in our daily life, which children see, or use everyday, everywhere. In the process of carrying out each invention, our young audience will be thinking and understanding the science, knowledge, and principle behind them, arousing their interest in creating new devises.” That’s what they say. Interestingly, the story editor behind this new series is an American: None other than Jymn Magon, creator of Disney’s Gummi Bears and TaleSpin. The series began with a pilot movie, Agent F.O.X., which is available in English. Currently episodes of Invention Story are posted on YouTube in the original Chinese. No word yet on an English version! 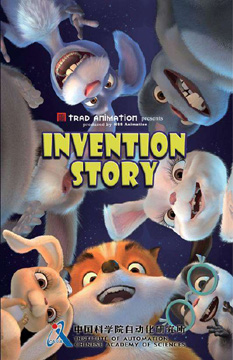