The Duck is Cover

Now here’s a Donald who hasn’t been as much in the news lately — much to his chagrin, probably! IDW Publishing presents Donald Quest, a new full-color adventure mini-series featuring Disney’s favorite duck. “In the steampunk warrior world of Feudarnia, only the Magnus Malleus can save humanity from marauding Meteorbeasts! It’s an epic weapon for an epic hero… so why is it up to Donald Duck to grab it before Magica De Spell, the Beagle Boys, and the Phantom Blot get there first?” Guess we’ll find out soon enough. Donald Quest is written by Stefano Ambrosio and Pat McGreal, with illustration by Andrea Freccero. Check it out over at IDW. Issue #1 is on the shelves now. 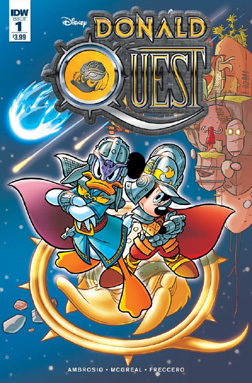