Giant Monsters Are On Their Way!

But enough about the recent election… Kronen’s Kaiju is a new full-color comic series written and illustrated by Chris Scalf (Werewolves vs. Dinosaurs). “Giant freaking city crushing monsters are real!  Darren Kronen lives in a small town. His friends all think he’s an awkward nerd living in a fantasy world obsessed with make-believe creatures and monsters. He even writes a blog called ‘Kronen’s Kaiju Chronicles’ where he speculates about the creatures of legend he obsesses over. But after a series of unexplained earthquakes brings teams of scientists and authorities into town to investigate, Darrin’s obsession grabs the unwanted attention of high level officials when details on his blog match the strange phenomenon that is secretly being investigated!” They’re coming to comic stores this December, thanks to American Mythology. Find out more over at Previews. 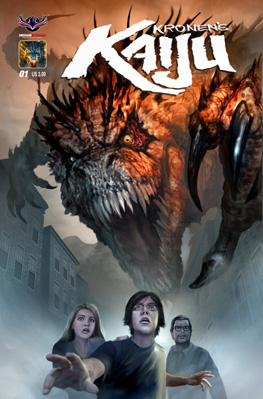