Out of Boneville… and Onto the Movie Screen

Thanks to Animation News Network we found out about an article over at the Hollywood Reporter. It seems that Mark Osborne (director of Kung Fu Panda and the recent film The Little Prince) has been tapped to finally adapt Jeff Smith’s award-winning comic Bone for the cinema — not just as one animated movie, but an entire trilogy to be produced by Warner Brothers. “The comic told of three Bone cousins — Fone Bone, Phoney Bone and Smiley Bone, all small, bald and human-like creatures with big noses — who are separated and lost in a vast uncharted desert after being run out of Boneville. One by one they find their way into a deep forested valley filled with wonderful and terrifying creatures. The comics were published from 1991 to 2004 and then rediscovered by a new and more mainstream generation when Scholastic began releasing them in graphic novel form.” Adam Kline is writing the script for the first film, along with Mr. Osborne, and Animal Logic (Happy Feet) are involved as well, so expect some top-notch CGI. We’ll let you know when we find out a release date. 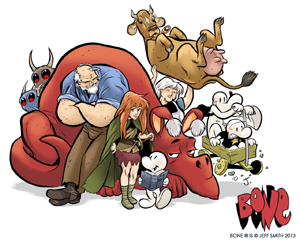