How did we ever miss these? Katherine Applegate is a writer of books for young readers, who has some interesting anthropomorphic credentials. The One and Only Ivan is a Newberry Award-winning novel from 2013 about a very special gorilla. “Inspired by the true story of a captive gorilla known as Ivan, this illustrated novel is told from the point of view of Ivan himself. Having spent twenty-seven years behind the glass walls of his enclosure in a shopping mall, Ivan has grown accustomed to humans watching him. He hardly ever thinks about his life in the jungle. Instead, Ivan occupies himself with television, his friends Stella and Bob, and painting. But when he meets Ruby, a baby elephant taken from the wild, he is forced to see their home, and his art, through new eyes.” Take a look over at Amazon.  Then more recently, and even more anthropomorphic perhaps, there’s Crenshaw from 2015. “Jackson and his family have fallen on hard times. There’s no more money for rent. And not much for food, either. His parents, his little sister, and their dog may have to live in their minivan. Again… Crenshaw is a cat. He’s large, he’s outspoken, and he’s imaginary. He has come back into Jackson’s life to help him. But is an imaginary friend enough to save this family from losing everything?” Guess we’ll find out soon enough. It’s also available at Amazon. 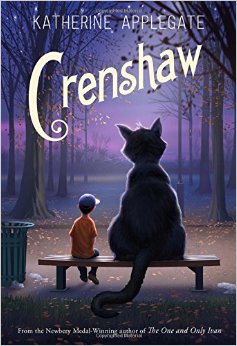