Still There Are Cities To Stomp

Another giant monster comic — this time, a black & white classic returns. According to Previews: “The giant kaiju return to ravage the Earth in the first volume of cult genre legend Mike Wolfer’s War Monsters! Originally released in 1987-89, Wolfer’s Daikazu series was his first published work, and issues #1-5 of the giant monster rumble are collected here for the first time ever in one giant volume! On a remote Pacific island, a group of strangers accidentally stumble upon the secret, underground base of a mad geneticist responsible for the creation of two gigantic behemoths, and only the ancient ‘god’ Daikazu stands against them in an earth-shaking battle that climaxes in downtown Tokyo!” The first issue arrives with a Bang at the end of November. 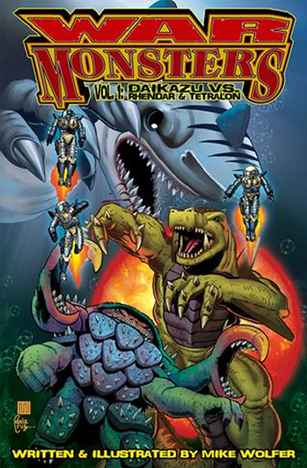