Earlier this year we made mention of animator Diane Obomsawin and her 2014 graphic novel, On Loving Women, which Drawn & Quarterly had recently re-published. In it (through her drawings of anthropomorphic characters) she talked about her own experience and those of her friends, discovering that they were women who loved women, and who wanted to share their experiences with others who felt the same. Well now Diane has turned several of those very personal stories (and those characters) into an animated short film called I Like Girls. And this last September, I Like Girls was awarded the Nelvana Grand Prize for Independent Short at this year’s Ottawa International Animation Festival, which is one of the largest in North America. Read the article over at Animation World Network to find out more about this and other prize-winning films. 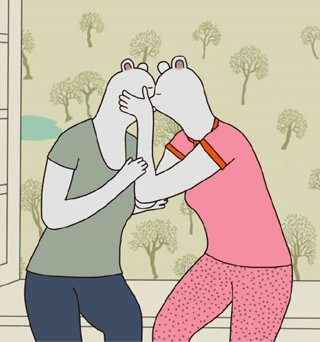