According to Beyond The Cartoon, Magic Light Pictures have announced they are adapting another popular children’s book for animation: In this case, The Highway Rat by Julia Donaldson and Axel Scheffler. “Directed by Jeroen Jaspaert (Stick Man), the half-hour animated special follows the tale of a greedy rat who tyrannizes animals along the highway, as he steals their food at every opportunity: Clover from a rabbit, nuts from a squirrel, a leaf from some ants… he even steals his own horse’s hay. However what he really craves are cakes and all things sugary, and it’s his sweet tooth that finally leads him to a sticky outcome.” Magic Light have become known for adapting books by Dondaldson and Scheffler, including popular favorites The Gruffalo and The Gruffalo’s Child. The Highway Rat is being animated by Triggerfish in South Africa, and it’s set to premier in the UK on BBC One for Christmas in 2017. 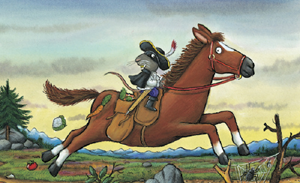