Speaking of Gaumont Animation, we couldn’t very well pass up on an animated show called Furry Wheels, now could we? “André is a hyperactive young sloth with oodles of drive. He’s the first of his kind to even leave his tree. And he’s not stopping there; he wants to shake the dust of this town off his feet and see the world, but before everything he must pass his driving test. First stop, Racers School to get his diploma, because any herbivore who wants to survive out there needs to learn to drive, fast! Or else you’ll quickly end up as a leopard’s luncheon meat.” Created by Frédéric Martin, Furry Wheels is distributed in Europe by Disney XD — with an eye on international markets of course. TBI Vision has an interview with Pierre Belaïsch of Gaumont about the show. 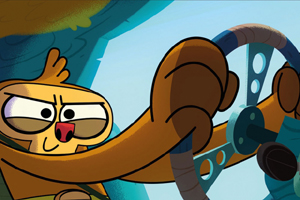