We can kind of see how the pitch for this series probably went… “Okay, kids love dinosaurs, and kids love superheroes.  How about… a show that has both??” That’s the basic idea behind Supersaurus 7, a new CGI animated series from Misery Bear creator Chris Hayward (helped along by designer and illustrator Henry Coate). According to Animation World Network, the show is “…set on a reimagined planet Earth, on the prehistoric sprawling continent of Pangea, long before human existence. Supersaurus 7 follows the comedic adventures of a group of young dinosaurs who chance upon a mysterious blue lava flowing from the very core of the Earth, whose energy transforms them into superhero dinosaurs. Each is armed with a super power that amplifies their dinosaur traits, and when they work together they can be an indomitable force, that is if they can learn to use their new powers correctly! Fending off rampaging T-Rex’s, rescuing distressed dinos from erupting volcanoes, and zapping incoming asteroids, these hot-headed, heroic and technologically advanced young dinosaurs strive to save the day. They also have to confront the rise of a new threat, the mammals, led by a despotic Gerbil with short rodent syndrome.” Like many of the shows we’ve discussed, it’s looking for distribution now. 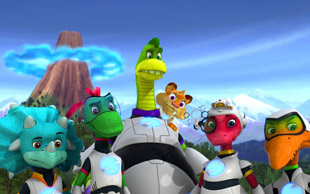