We missed this one earlier this year, but it’s worth mentioning: For a few years now Disney has been distributing Animasia Studio’s 2D animated series Chuck Chicken on their channels in Southeast Asia. Now Animation Magazine has announced that Animasia have teamed up with Zero One Animation in China to create Chuck Chicken — The Movie. Animasia’s official web site lays it out pretty clear: “Chuck Chicken takes place on an island called Rocky Perch, a land filled with chaos, mayhem and birds…… lots and lots of birds. Welcome to Golden Egg Securities, the number one security service on Rocky Perch. Chuck, who runs the company with his two friends, Flick and Wing. They provide Kung Fu style security to the citizens of Rocky Perch and their valuables, as they travel across the island. Chuck also inherited a very special talisman in the shape of a golden egg, an object that bestows amazing powers on whomever possesses it, and turns Chuck into Kung Fu Chicken. Unfortunately for Chuck, the talisman doesn’t come with any instructions, so he doesn’t know how to properly control his new abilities.” Got all that? Given the interest that many Chinese animation studios have shown in creating product intended for American markets, there’s a good chance we may have an English version of Chuck Chicken waiting in the wings. 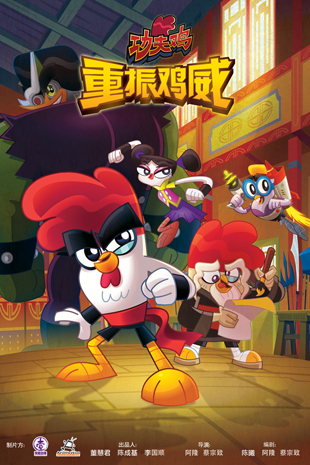