Judge Him By His Size, Do You?

This is from a couple of years ago, but we just found it recently at Comic Con in San Diego. Mouseheart is a fantasy adventure series for young readers, written by Lisa Fiedler and illustrated by Vivienne To. “Hopper is just an ordinary pet-shop mouse—until he escapes. Soon he finds himself below the bustling streets of Brooklyn, deep within the untamed tangles of transit tunnels, and in Atlantia, a glorious utopian rat civilization. But all is not as it seems. Hopper misses Pinkie and Pup, the siblings he lost in the escape attempt. Atlantia is constantly threatened by roving rebels who wish to bring the city to its knees. And there are cats everywhere, cats who would normally eat a rodent in a second, but leave the rats unharmed . . . and no one can seem to answer why. Soon Hopper is caught in the cross-hairs of an epic battle, one that spans generations and species. As the clashes rage, Hopper learns terrible, extraordinary secrets.” Mouseheart was published in 2014 by Margaret K. McElderry Books. Since then there have been two more, Hopper’s Destiny and Return of the Forgotten. There’s lots more at the official Mouseheart web site. 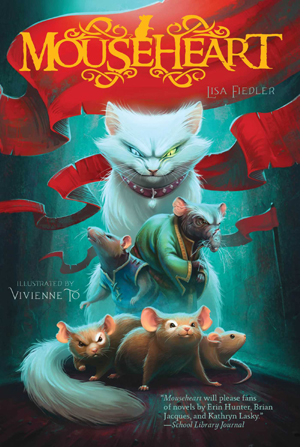