There’s a new full-color trade paperback on its way from IDW publishing, one that brings together comics from several celebrated Disney comic artists — all of them presenting stories set at the Disney Parks! Here’s what they say: “Sixty years of Disney Parks—who knew? Now IDW is celebrating with decades of Disney’s classic Park-themed adventure comics! Carl Barks‘ Scrooge McDuck and Donald travel from the Mark Twain Riverboat to the top of the Matterhorn… then Mickey investigates the strange disappearance of the Country Bear Jamboree. And is that the real Pegleg Pete standing in for the Cast Member who plays him?” Featuring stories and art from Carl Barks, Giorgio Cavazzano, Massimo Fecchi, and Victor “Vicar” Arriagada Rios, Donald and Mickey: The Magic Kingdom Collection comes to comic book stores this January. 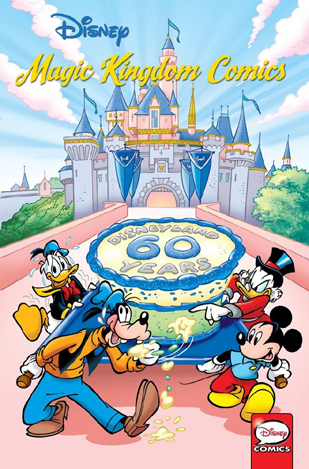