Paul Schoeni is an artist, illustrator, and animation designer who has spent much of his career working for Dreamworks Animation. According to his web site, the films he’s worked on have included Kung Fu Panda, Monsters vs Aliens, Megamind, How to Train Your Dragon 2, Shrek Forever After, The Croods, Turbo, Trolls, and The Boss Baby. He works in 2D and 3D on computers, but he also has a passion for working with good-old pencil and paper. Not to mention that he has a very distinctive art style! At his Shop you’ll find his sketch book called Monsters and Mayhem for sale, plus many examples of his other works. 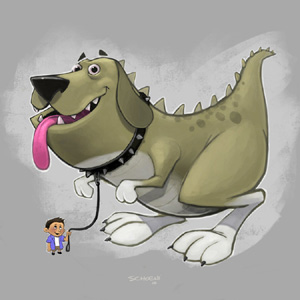