Never Possum on the Right

Here’s an artist who also puts things quite simply: “Justin Hilden is an animator and illustrator based in Los Angeles. He loves possums and Scandinavian pastries.” Based on the former at least, Justin created an animated short film called Oh Possum, which can be viewed on his web site. There you will also find an extensive essay about his creative process of dreaming up the possum brothers, Switch and Ellsworth, and bringing them to life through animation. You can also see episodes of The Roadents, a series about two gophers on a road trip that Justin created for Bix Pix Entertainment and Sony Pictures Television. 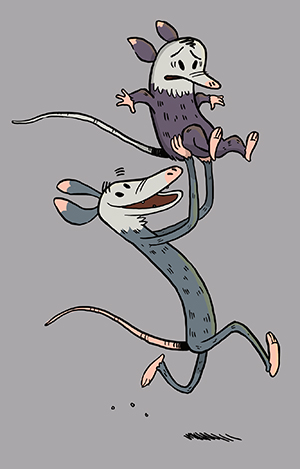