Hound Dogs and Otters and Bears, Oh My!

Hollie Hibbert was born to be an artist, she says at her web site. “Growing up in Idaho, crayons, colored pencils, and markers were her most loyal companions. However, the thought of becoming an artist never crossed her mind until college. She has a big soft spot for hound dogs, otters, and especially bears.” To that end she has created fine art prints, theater posters, and also fan art works. She has even illustrated several books for young readers, all of which have anthropomorphic interest: An Orphan No More (a story of adoption) by Jerry Windle and Jordan Windle, The Three Bears ABC (which uses the classic fairy tale to teach the alphabet) by Grace Maccarone, the Dolphin School series by Catherine Hapka, and Pupunzel (you can guess!) by Maribeth Boelts. 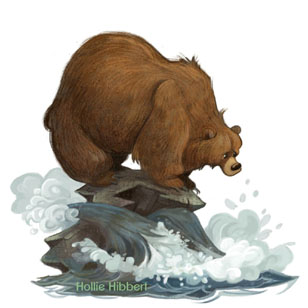