Who Needs A Talking Rabbit?

We’ve previously mentioned the works of fiction writer Brandon Blankenburg. Recently we came across a new book of his from 2016: Jesse’s Conveyence moves a bit away from the author’s usual “natural history horror” works… or does it? “Terry is writing a book about a schizophrenic whose hallucinations of Jesse, a talking kangaroo, forces the protagonist to change his life. For Terry, the book is to be his greatest achievement. However, the more he writes, the more his own life and outlook changes. The line between reality and fiction blur when Terry begins thinking of Jesse as more than a character in his book.” Jesse’s Conveyence is available now for the Kindle reader. 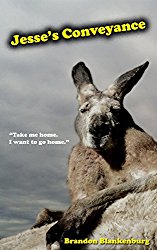