Just Piling It On

The folks at American Mythology: Dark (whom you may recall) have kicked things up yet another notch with the release of Werewolves vs. Dinosaurs vs. Yetis. They mean it. “Cade and Smith have been transported through a portal into a strange and deadly new realm. Now these unlikely allies need to get back to their own world, despite being hunted by ferocious Werewolves and Dinosaurs. And their temporary reprieve from danger is an illusion.  The mysterious Trench and his cowboy mercenaries are still tracking them and they are on the cusp of being caught in a horror free-for-all between Werewolves, Dinosaurs, and the legendary Yeti!” Created by Eric Dobson, Chris Scalf, and Matt Frank, this new full-color comic series premiers in February. 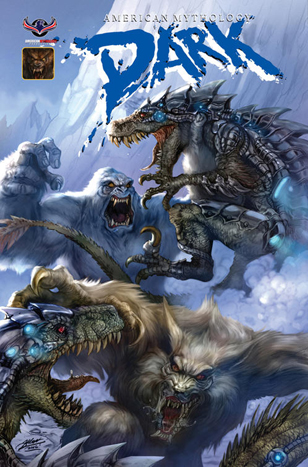