Return to Where the Planet Began

Titan Books have released a new science fiction anthology called Planet of the Apes: Tales from the Forbidden Zone. It features an impressive roster of authors presenting stories set in the world of the original five-movie Planet of the Apes series, or in the world of the 1974 live-action TV series (which is not exactly the same world, but close). “The 1968 film Planet of the Apes was a seminal work of science fiction that inspired generations of filmmakers and authors. Now a who’s who of modern writers — including Kevin J. Anderson, Nancy Collins, Jonathan Maberry, and John Jackson Miller [and many more] — produces sixteen brand-new, exclusive stories… Each writer will explore a different drama within the post-apocalyptic world, treating readers to their unique visions and non-stop adventure.” Edited by Rich Handley and Jim Beard, it’s available now in paperback at Amazon. 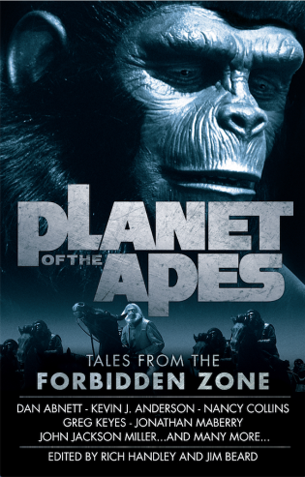