Netflix has a new stop-motion animated series hitting the digital byways soon. Here’s what the creators say: “From American Greetings Entertainment and Stoopid Buddy Stoodios, Buddy Thunderstruck is an action-comedy, stop-motion extravaganza that follows the adventures of a semi-truck racing dog named Buddy and his albino ferret mechanic. It all goes down in race-obsessed Greasepit, a place chock full of larger-than-life characters and nitro-burning, gear-slamming, tire-squealing, fish-tailing good times.” In case you didn’t know, Stoopid Buddy Stoodios are the house that animates Robot Chicken, and American Greetings Entertainment are the original creators of the Care Bears — as the trailer says, Yes Really. [Thanks to Changa Lion from Furry.Today for pointing this one out. Visit there to see new trailer!] 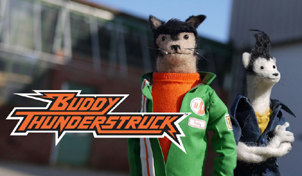