Recently we learned of a new Chinese/American co-production for television and the ‘nets called Valt the Wonder Deer. It’s produced by DreamEast Pictures, and late last year they inked a deal with Jetpack Distribution to bring the series out to the world.  Valt is based on the Chinese myth of the nine-colored deer. According to an article at Animation magazine’s web site, “Valt the Wonder Deer follows Valt and his friends as they encounter funny moments, scary trials and plenty of adventure on their journey to obtain the power of the Five Magic Elements and rescue his trapped parents, the Deer King and Queen, from the comically evil overlords of the Land of Metal. The show uses the group’s journey and experiences to demonstrate themes of love, courage, friendship and responsibility to its young viewers.” Some of the American crew of Valt have previously worked on animation as diverse as Beavis & Butt-Head, Skylanders, Ben 10, Kung Fu Panda, and Dragons: Riders of Berk. Furry.Today has more, including the trailer up on Vimeo. [Again, thanks to Changa Lion for this!] 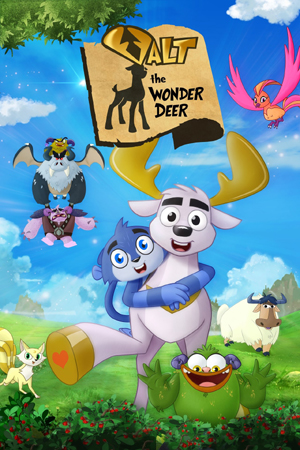