Lanterns of the Forbidden Zone

Is there no end to the mash-ups? (Probably not.) After last year’s well-received Planet of the Apes and Tarzan crossover comic, BOOM! Studios is at it again — teaming up with DC Comics this time to bring us… Planet of the Apes / Green Lantern. Yes. (Pretty straight-forward title, huh?) In this new full-color 6-issue miniseries, Cornelius the chimpanzee scientist investigates a disturbance in the Forbidden Zone… and discovers an ancient ring of power. Then, the rest of the Green Lantern Corps catches solar wind of it… According to the publishers, “BOOM! Studios, DC, and Twentieth Century Fox Consumer Products are excited to bring together two celebrated pop culture properties in a historic comics crossover event when the talking simians of the Planet of the Apes meet the Emerald Crusaders of the Green Lantern Corps. Written by Robbie Thompson (Silk) and Justin Jordan (Green Lantern), and illustrated by Barnaby Bagenda (The Omega Men), Planet of the Apes/Green Lantern debuts February 1st as a 6-issue monthly limited series.” So it’s there for you now! Blastr.com has more. 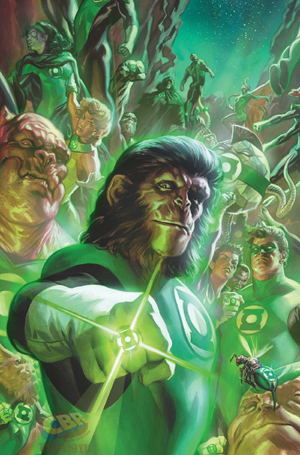